There is something interesting about seeing a musician play a solo show. Without a band, they really have no one else to rely on, and it seems like you get a genuine representation of how talented they are. Frank Turner is relatively recent discovery for me, so I’d never seen him without the Sleeping Souls, prior to last night.  Even at the biggest of shows, it feels like every single person is included, but seeing him play at a venue as small as The Wheelbarrow was a different experience entirely. There was something wonderful about seeing a calmer set, in such a tiny pub. I must admit the one security person on stage did make me laugh – as though there was going to be slightly overly-enthusiastic finger pointing to I Still Believe, or some unnecessarily riotous swaying!

Everyone in the audience was obviously so enthusiastic about each song played – the fact that that many people can appear just a couple of days after it was announced is a sure sign of the solid reputation he has earned. I’ve written this several times now, but it never fails to be true – people at Frank Turner gigs are genuinely nice. It was very busy, which resulted in falling onto the stage and such (I have bruise the size of a small country on my leg!), but even that was executed in a polite way. Hearing that many people sing along to every word, really cements the importance that music has. I point blank refuse to stop believing in the power it  has – and last night’s show simply confirmed that belief.

There are so many artists that would be nothing without auto-tuning, or just plain miming - it seems hugely ridiculous that they are the ones getting the most recognition. I would rather go and listen to Frank sing a selection of cartoon theme-tunes in the style of Justin Bieber, than I would go and see most of the artists gracing the current UK Top 40.  It seems illogical that genuine talent is being outrun by those who possess none. One Direction types seem to be taking over the world, but smaller artists, and smaller venues (which I personally think are 1000% more fun), are getting less recognition. Put it this way – Frank makes me cry because his lyrics are so inspirational, One Direction make me cry because their lyrics are so truly and utterly horrific.

Very few musicians, who have reached the level of success that he has, seem to maintain the attitude that everyone should be treated as equals – his lack of airs and graces is hugely refreshing.  At each show, the same idea seems to resonate – that there should be hope and positivity towards life. This seemed particularly prevalent last night, especially linked to the idea that a new year is a new beginning. I obviously can’t speak for anyone else, but it made me want to make 2013 the best year that it can possibly be. As though I can achieve absolutely anything – a fleeting feeling, that probably only lasts until the last chord is played, but it really does give a massive boost. I can’t remember exactly what was said, but it was something along the lines of ‘if you want to do something in your life, just f****** do it!’ It’s an idea that seems so simplistic, but when considered, is probably what everyone should be aiming for.

I left feeling utterly drained, I’ll admit to the point of emotions ridiculously on edge. Frank seems to put everything into each show he plays, and you can’t help but do the same. Hearing lyrics and music that you genuinely believe in, is a wonderful but tiring experience! 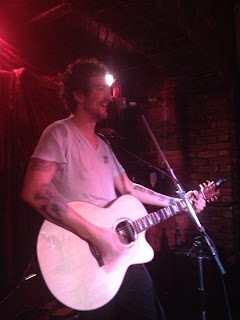